Well another commission is complete, and going out in the mail today! This reining bridle was made to match a customer's saddle, and going to be shown on a Chex to Cash resin.  It features all cast buckles and a very nice reining bit from TWMHC on eBay. I also used my last sterling conchos with crystal centers. 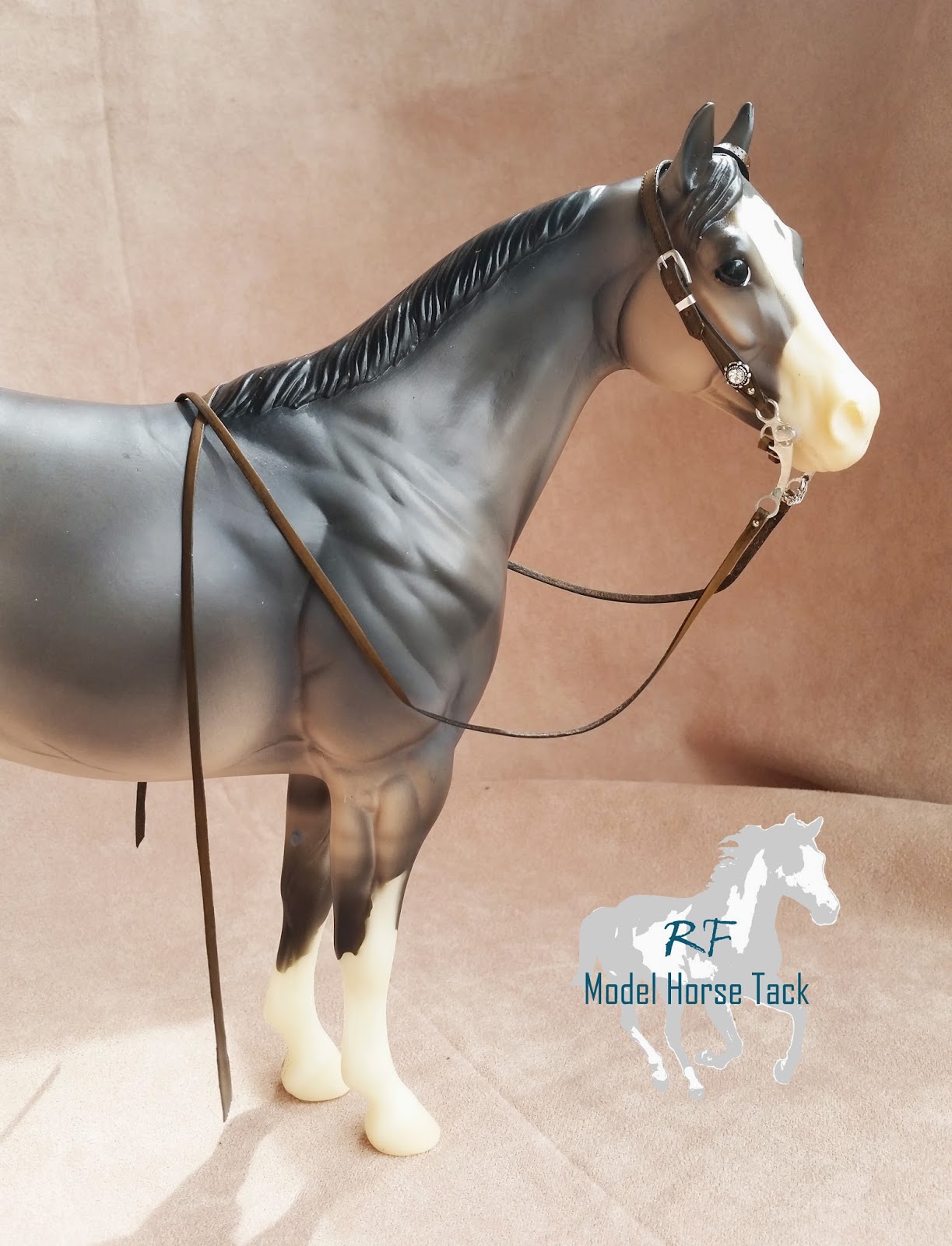 Now on to a classic scale English set, and another polo set!
Posted by Rachel Fail at 8:56 AM No comments:

Brand new from Rachel Fail Model Horse Tack, this is a polo set (although it could work in some other English disciplines) made from a new pattern.  It fits a rider well, and is very adjustable.  Tongue buckles with keepers everywhere, and features a pelham bit with adjustable curb chain and double reins.  Real rubber bit guards and martingale stopper!  Black polo wraps and white silicone bell boots, and custom stitched black saddle pad with white clover design.  Breastplate is padded, and girth features roller buckles.  All the buckles are real, so you can change bits (making the set versatile in the English arena). This set has everything to shine in performance. Check out my blog post on polo, CLICK HERE and visit my Facebook page.

This is the link to the listing: Ad on MH$P

Posted by Rachel Fail at 6:38 AM No comments:

All About the Sport of Polo 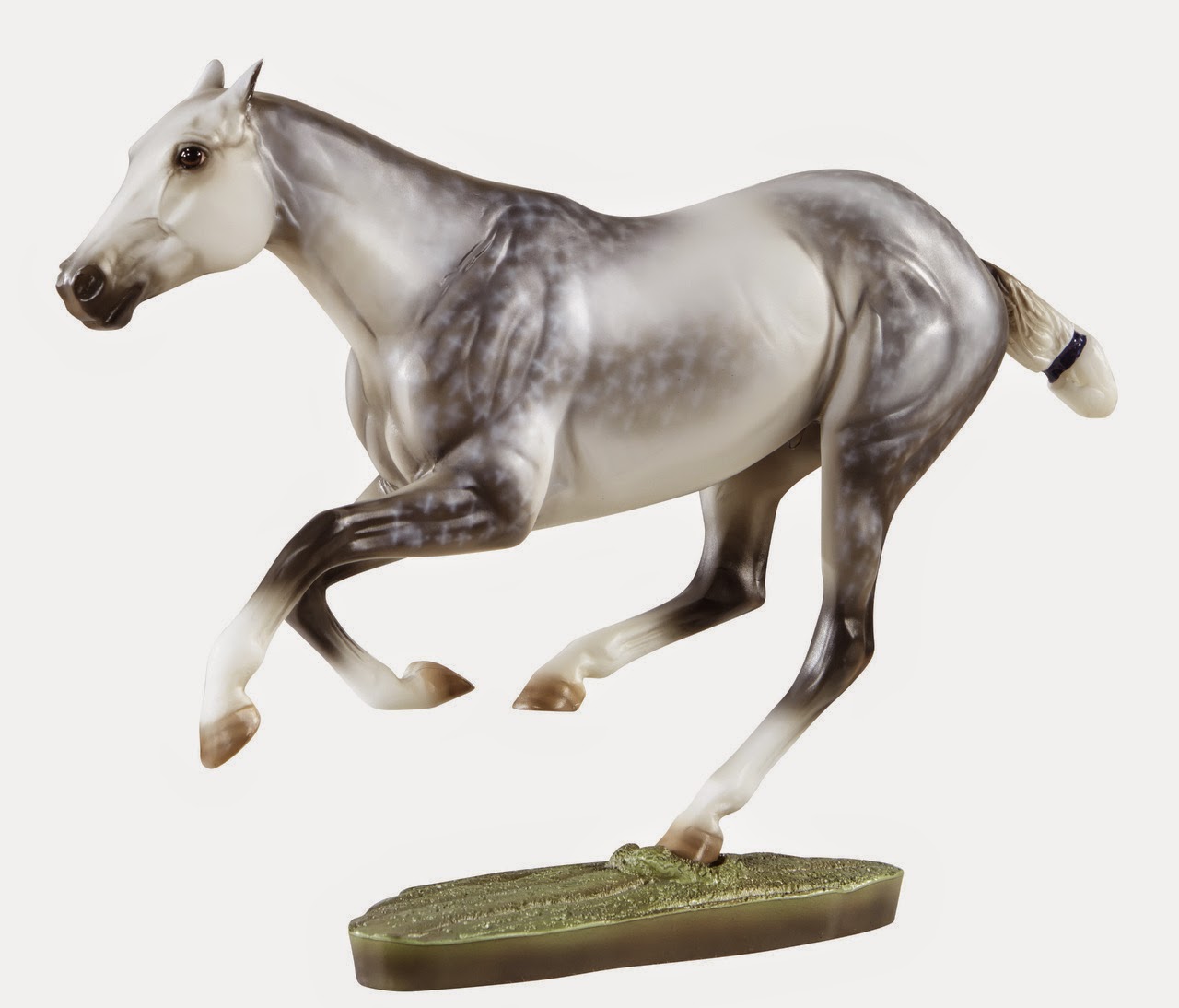 Inspired by the new Breyer Polo Pony on the Smarty Jones mold, I thought I would write a post about the fast paced stick and ball game of Polo that is played on horseback.

The Polo Pony Breyer mold by C. Hess was introduced in 1976 in classic scale, shown below. 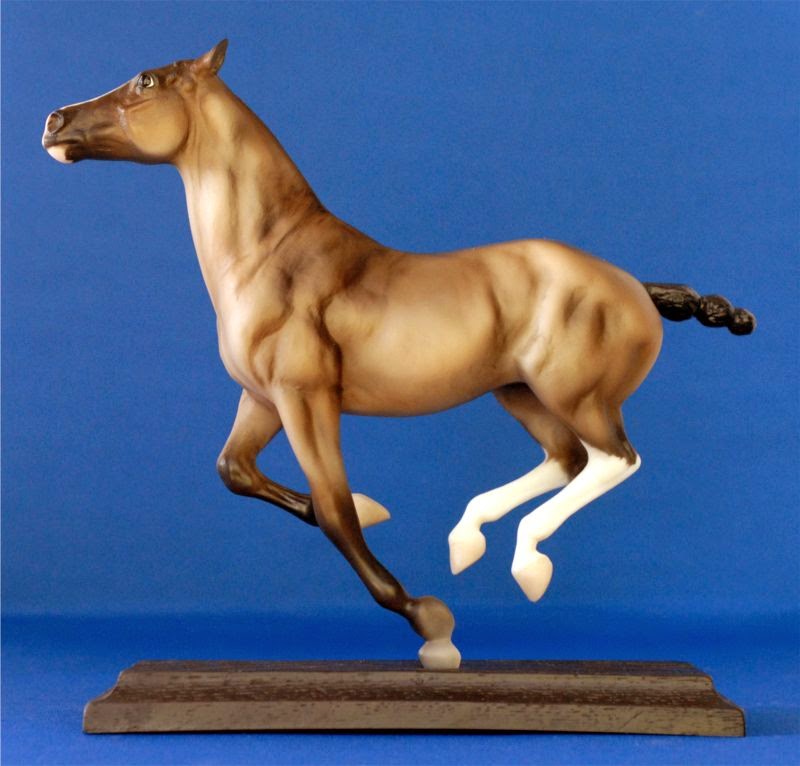 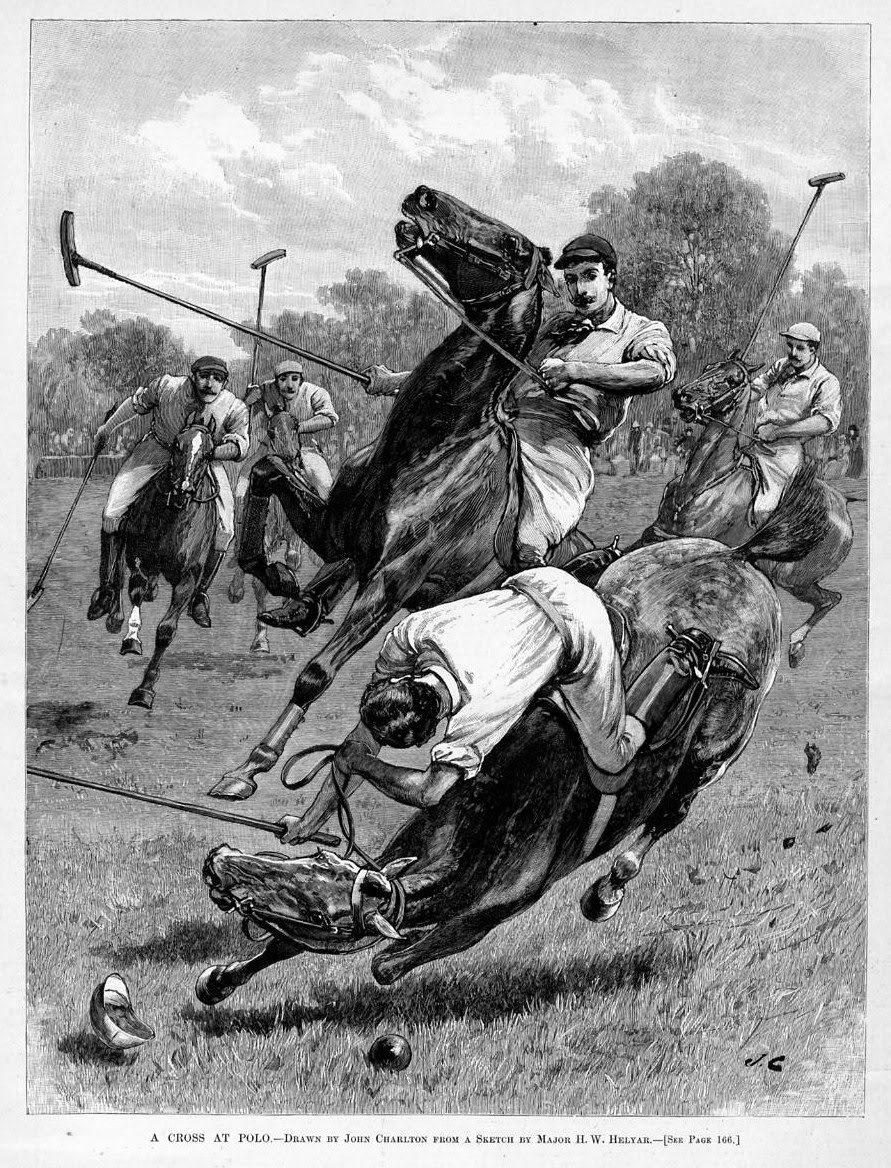 Polo originated over 2000 years ago.  The British organized it in a military fashion before motorized vehicles took the place of horses in society and on the battlefield.  The birthplace of modern polo can be artibuted to the Silchar Club in 1859.  Originally the game was played with nine riders, then reduced to seven, and the current game is played with only four now that the ponies are bigger and faster than their predecessors.  The English height limit in 1876 was 14 hands high, and increased to 14.2 in 1896 before being abolished in 1919.  Polo ponies today average 15.1 hands high. The sport was dubbed "hocky on horseback" by spectators in the 1860's as popularity grew.  Hurlingham club became the headquarters of English polo, with the first English rules in 1875.  The game spread after the formation of the National Pony Society in 1893 and began to spread throughout the British Empire, Argentina and the United States.

Argentina became the leaders in breeding and exporting of polo ponies, owing to the toughness of their native breed and good supply of talented low-wage horsemen.  The "Golden Age" of polo in the 1920's and 30's had players such as Tommy Hichcock and Cecil Smith, but is mostly played on a club level today under the U.S. Polo Association. 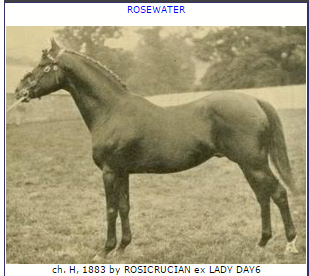 Sir Humphrey de Traffod's small Thoroughbred, Rosewater is considered the foundation for modern polo ponies bred in England (hint hint, Breyer, we need a portrait of this horse!). Pony crosses of the Connemara and New Forest were popular before the height limit was abolished.  The attributes that a successful polo pony needs includes courage, agility, perfect obedience, speed, and ability to "turn on a six-pence" in addition to stopping in his own length.  Flying lead changes should be second nature, and his build should include a long neck, good shoulders, short strong back, depth of girth, immensely strong quarters and hocks that are well let down. It's imperative he possess the ability is to stop and turn 180 degrees, and neck rein since he is ridden with one hand. The pony's legs are put under a great deal of stress, so supportive bandages are a must.

The Field and Equipment
The polo field should not exceed 300 yards, the goals (8 yards wide) must be at least 250 yards apart. Goal posts are at minimum 10 feet high.

The mallet is a 48-54 inch cane with a 8 1/2-9 1/2 inch head. The stick materials range from sycamore, ash, to bamboo. Grip can be rubber, leather, lampwick, or towelling, and is fitted with a wrist sling. 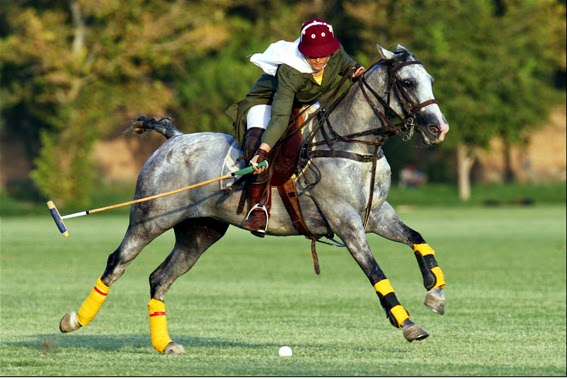 The polo saddle has a relatively flat seat, extra-long sweat flaps and no knee or thigh rolls, it's designed specifically for polo, during witch the rider needs to travel and great speed and maintain maneuverability for hitting the ball. 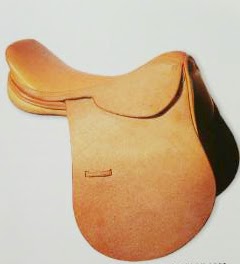 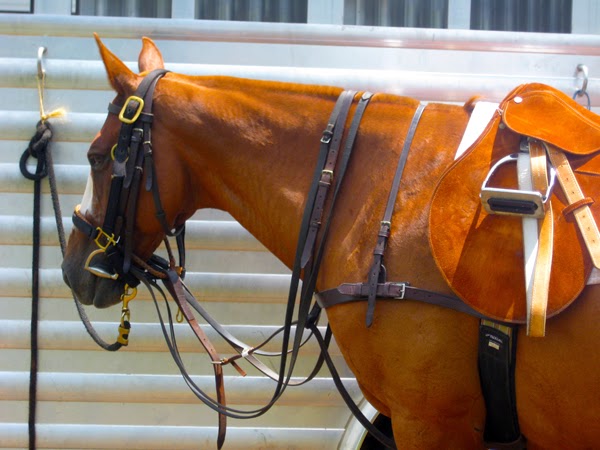 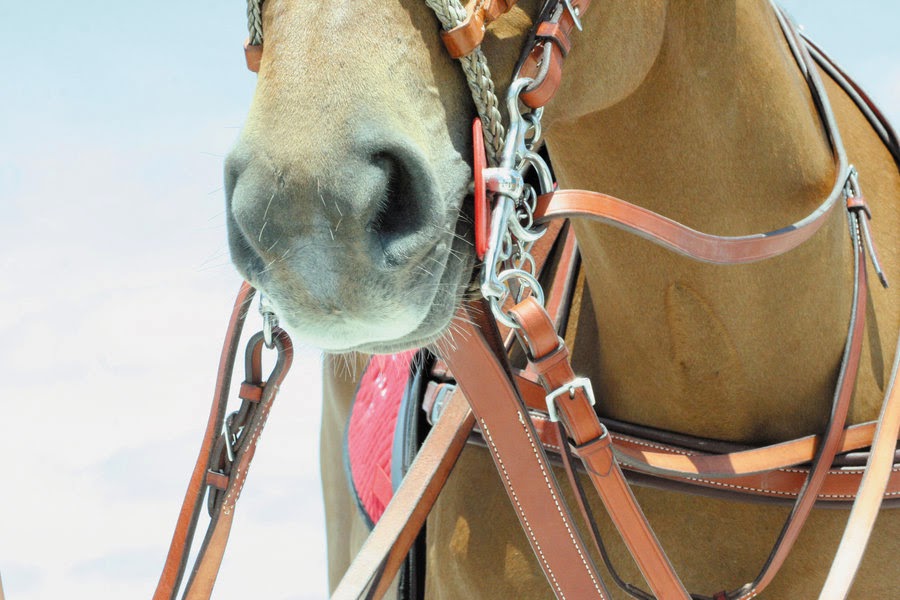 There are only two bits allowed, the gag (left) and the pelham (right & above). 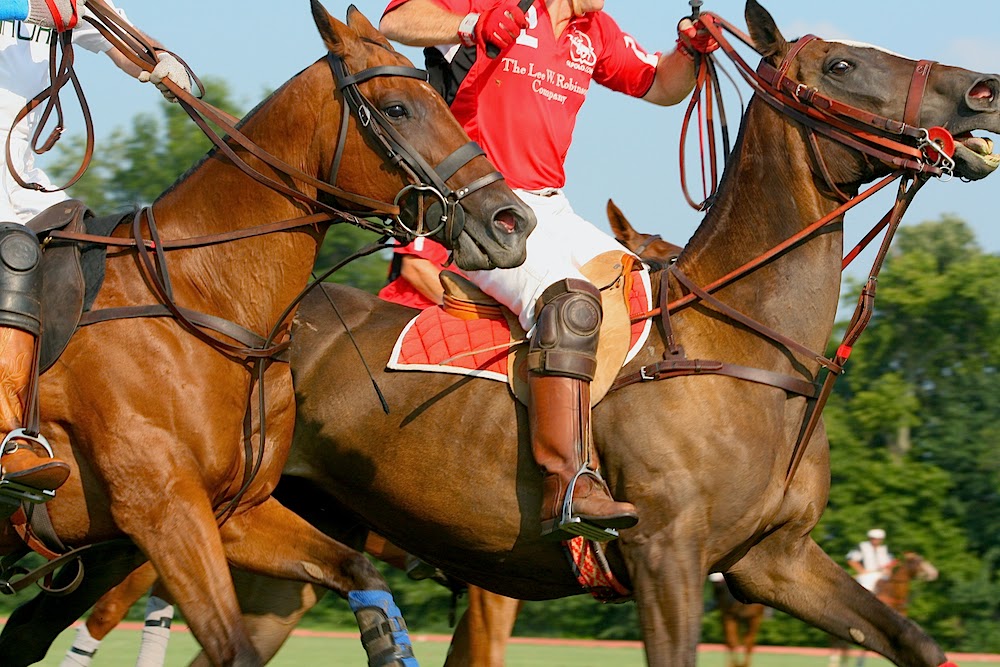 The Game
Played with four players, as follows:

Players should have courage, judgement, sense of timing, good natural eye for a moving ball, balance and at least basic horsemanship.  There are nine different strokes:

Four, Six, Seven or Eight chukkas of 7 1/2 minutes each make up a game, usually four to six with 3 minute breaks in between and a 5 minute half-time. Teams change ends (swap goals) every time a team scores.  Each player needs at least three ponies to play in a match, because one pony cannot play more than two chukkas and a reserve pony is needed in case of injury or lameness.

Games are played on a handicap basis, each player is rated in goals or minus goals from -2 to 10. Totals are added, and one is subtracted from the other to produce the starting score of the lower-rated team.

The rules are aimed at reducing risk to the horses and players, and include penalties for causing danger.

The games played in England, US, and India have all evolved into fairly different styles of game play and strategy although they share similar roots.

In this video I cover tongue and sliding buckle how-to's. 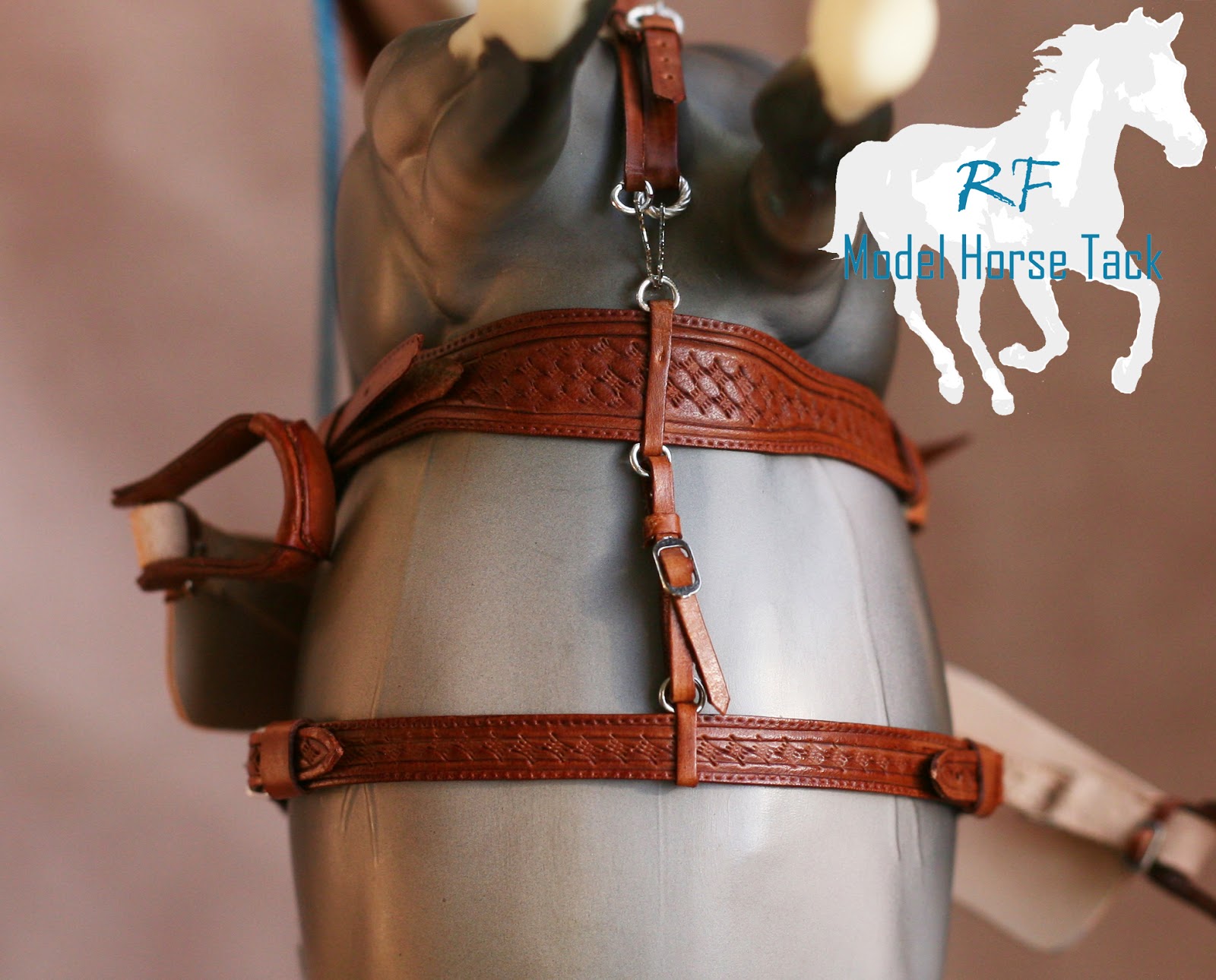 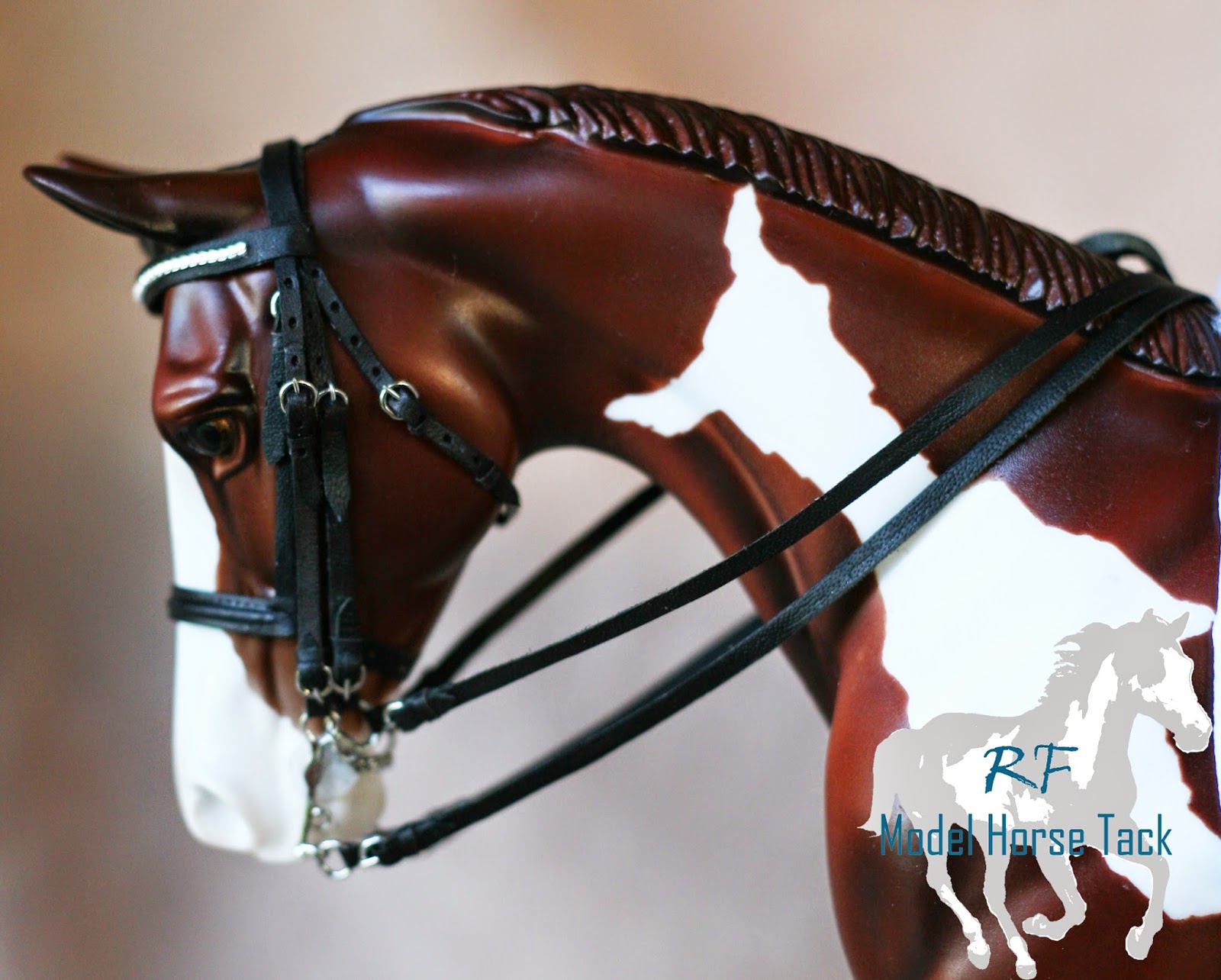 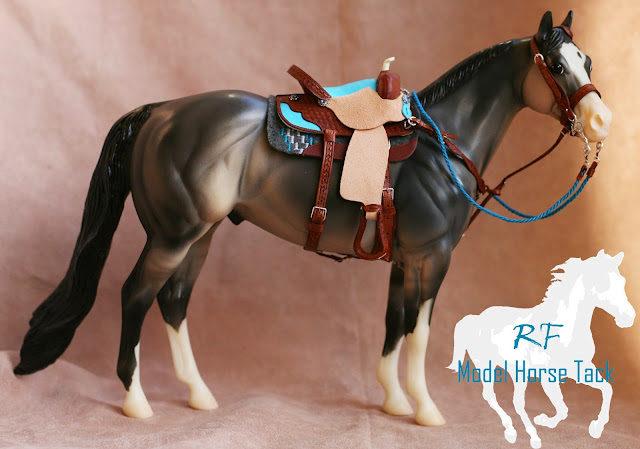 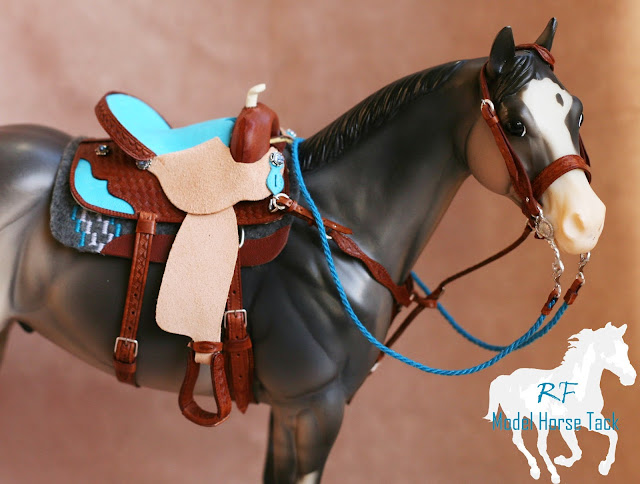 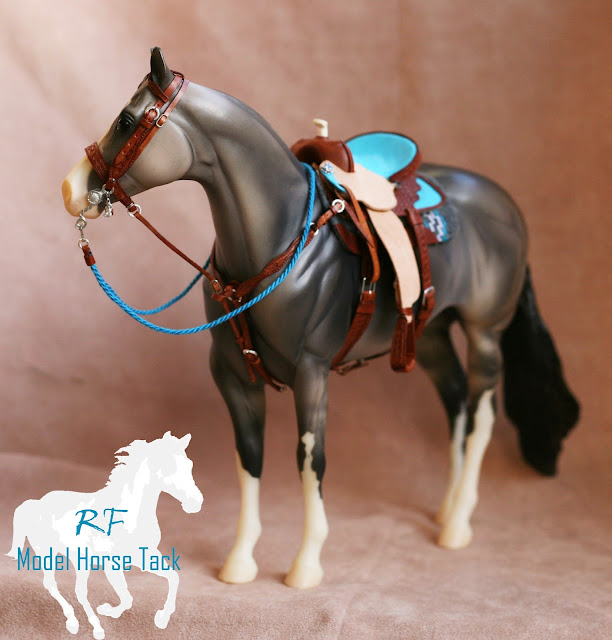 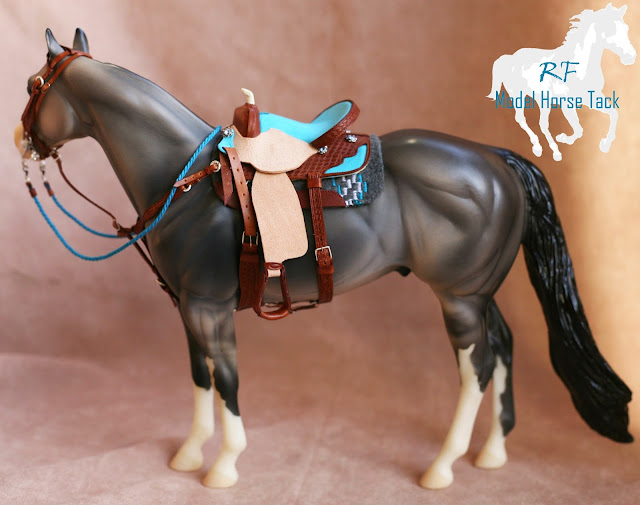 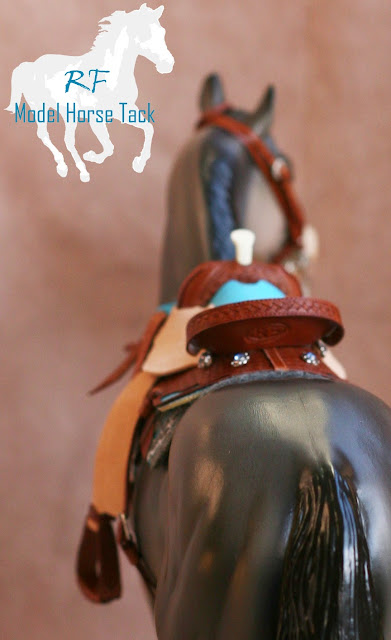 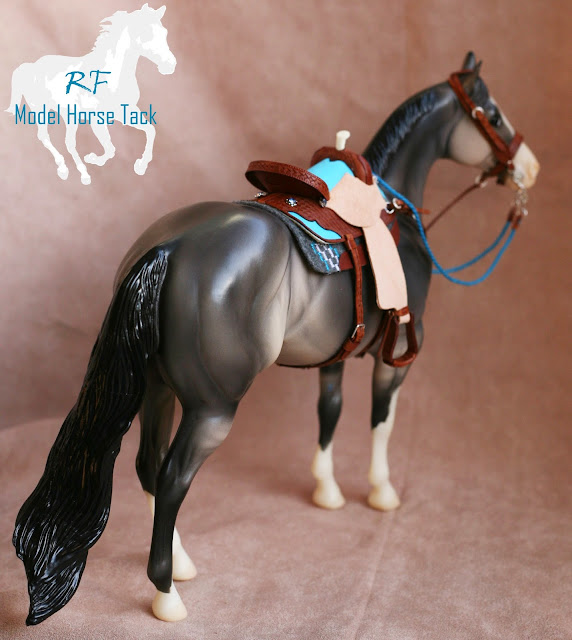 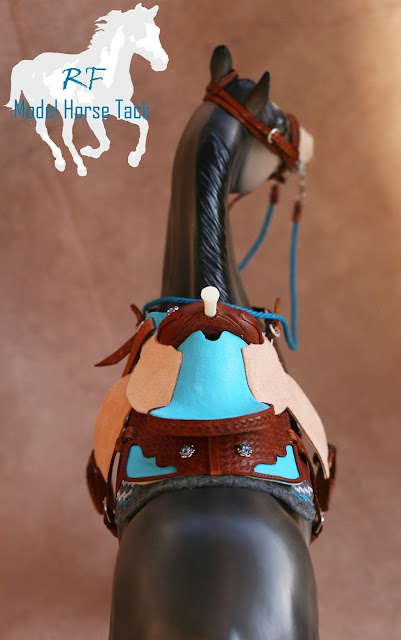 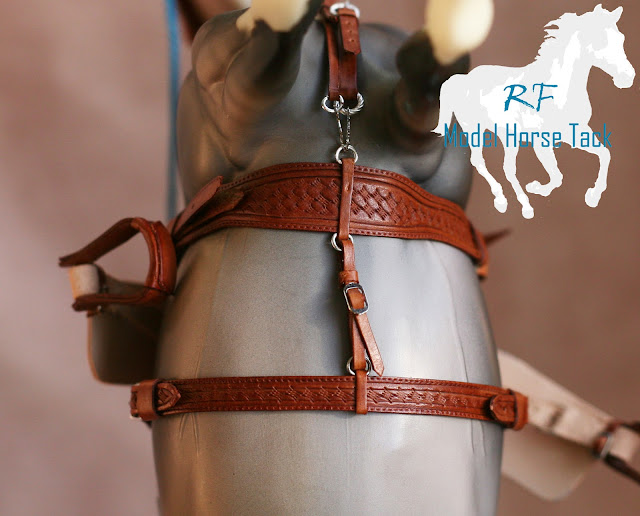 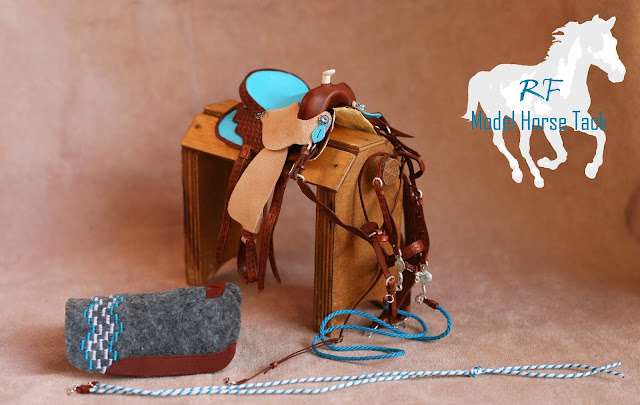 Posted by Rachel Fail at 4:47 PM No comments: 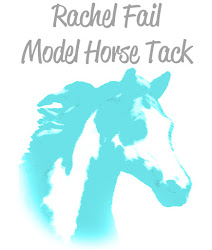 Rachel Fail
I'm Rachel Fail, and I've been an avid model horse tack maker since 2008. I take commissions when I can, and my tack is proven NAN quality.